As I gear up to head to Gaspe this Wednesday for a few weeks, I thought I'd share with the readers a great tune written by Neil MacKay, a fiddler from Saint-Urbain-Premier, Quebec in the Chateauguay Valley.

Neil played for Gaspé parties in the Montreal for many years and was featured in the audio documentary I produced for the StoryNet project. One of the great things about spending so much time working on this project was that I had the chance to listen closely and repetitively to a bunch of great music. This tune was one of the pieces featured in the documentary. I'm really touched by all the people (over 218 at the time of this writing) who have listened to the documentary and left positive feedback since it was released last week. Knowing how much this music means to the Gaspesian community is a constant reminder of why I love doing this kind of work.

Anyhow, as I'm looking forward to quite a few Gaspé parties in the kitchens around Douglastown in the next few weeks, this tune, called "The Gaspe Party," only seemed appropriate. 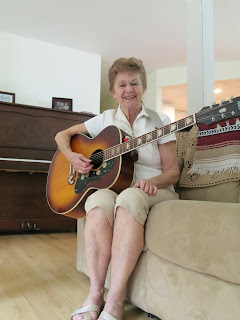 Its been a slow year for posting here with school and other projects since I decided to devote myself to the music path full-time. Anyhow, I spent the entire month of June working on an audio documentary for the StoryNet oral history project run by the Quebec Anglophone Heritage Network.

The audio documentary features three of my favourite people that Gaspe fiddling has introduced me to over the last few years: Brigid Drody, Cyril Devouge, and Neil MacKay. My idea for the documentary was to explore how music has connected these three musicians across six decades and six hundred miles, from the Gaspe Coast to the Chateauguay Valley, and to "hear" these musical relationships through Brigid's ears.

You can listen here:

The music featured spans six decades and is played exclusively by the three musicians or their friends and families in the Gaspe and Chateauguay Valley—from the archival collections of Brian Morris, Brigid Drody, and Glenn Patterson. The music is:

The Quebec Anglophone Heritage Network (QAHN) has been very good to me and an active supporter of Gaspesian culture and English-speaking heritage in the province more generally. They do really amazing work. I especially encourage people to check out the other stories available online at the StoryNet website, a truly amazing initiative.

Dwane Wilkin runs the StoryNet project and many other initiatives at QAHN and without his support this documentary would not have been possible. It was a pleasure to be able to contribute to StoryNet.

I also wanted to thank Brigid and Neil MacKay for allowing me to interview them for this project. Shea Shackleford is a personal friend and a great radio producer, originally from the U.S. and now living in Montreal, who gave me lots of guidance along the way in the nuts n' bolts of making an audio documentary and I owe him a huge thanks too. He has a bunch of podcasts and radio stories available online at bigshed.org.