Here's a post that I began working on in last July but have only got around to finishing now. Its long overdue to say the least:

On July 9, 2011 we held a musical memorial to our good friend Cy Devouge who passed away last March. The get-together was organized by Cy's relatives and held at his son Danny and his wife Tina's lovely place in Hudson, Quebec. Brigid, Brian, Neil MacKay, and I had a great time playing all afternoon and meeting Cy's family.
One of the "big stars" of the afternoon in my mind was Cy's younger sister, Leona of North Hero, Vermont in the Champlain Islands. Like a lot of old-time Gaspesians, you could really see the strong the connection she has to old-time fiddle music. Her feet were clogging in time the whole afternoon just like her brothers used to do. She said she learned how to clog her feet from the time she could walk. The whole afternoon she was hanging out as close as possible to the musicians, soaking up the tunes. People like Leona always remind me again how powerful this music is in bringing back fond memories of times past here in Canada. She was born into a house where her mother, father, and three out of four brothers played the fiddle and told us that "most people can't understand how much this music does for me, because they were born into the music like I was". After Neil and another older gentleman got up and did some inspiring step-dancing, Leona wasn't shy and got up and tried to give a few steps. At 86 years young, I say, "hats off to you Leona!"
Also, Cy's daughter-in-law made a really beautiful binder of the Devouge family history with great photos, genealogy, and a type-written autobiography that Cyril did chronicling his life from his roots on the Gaspé coast up to adulthood. The things he experienced are really of another time and I hope to share this autobiography with the readers here in the near future.

It is with great sadness that I learned just after returning from Gaspé this summer, that Leona Devouge passed away in mid-August at her home in North Hero, Vermont. I had been looking forward to visiting her with her niece Trena and playing some of her brother's and father's tunes for her. She was such a beautiful person with a radiant personality, just like Cy and was in remarkably good health (she still mowed her own lawn and lived by herself at 86). So it was quite a shock to everyone to hear of her passing. I composed a waltz for her the other week which I'll post sometime soon when I have finished ironing it out.

I want to extend a big thanks to all the Devouge family for putting on such a wonderful afternoon this past summer and for sending me pictures and information. Here is a really nice memento that extended family member Marty C made to thank us musicians. 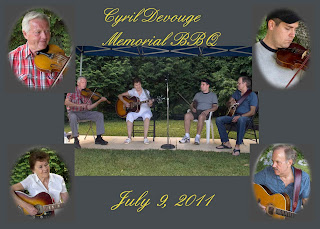 I wanted to make you aware of a campaign going on right now to help save Holy Name Hall in Douglastown.  It is part of a contest run by a T.V. program here in Quebec where people vote online to save a historical building in Quebec.  Luc Shaput from Douglastown has been working hard over the past couple years to have this building made usable again for the population of Douglastown and the Gaspe coast.

The site is in French but here are my step-by-step instructions on how to vote for the non-French speaking readers:

Keep in mind that you can vote once every 24 hours so please return to the site and vote every day. You can vote until December 16th.


Here is some great background information on Holy Name Hall and the Irish community around Douglastown that Luc Shaput has prepared and allowed me to use here:

Many know that Irish immigrants have adopted new lands as their home throughout their history. However, few know that some of these immigrants chose the Gaspé Peninsula as early as the 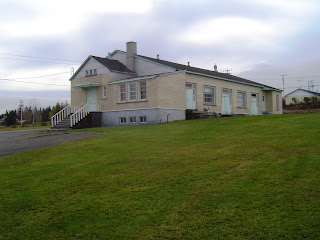 second half of the 17th century to settle.  Some of these Irish were Loyalists fleeing persecution in the United States after the Revolutionary War, others were ordinary peasants in search of new opportunities in farming or the fisheries controlled then by Jersey companies. The Morris, Kennedy, Rooney, Hackett, Maloney, McDonald and Walsh families are some of the oldest families who chose to start a new life in Douglastown on the side of St. John's river which flows into the bay of Gaspé.  Most of the time, life was a matter of survival. Despite harsh difficulties, the Irish succeeded in becoming a strong, thriving community growing alongside English, French Canadian, Scottish and Jersey families. A significant part of their culture was maintained through  religion, building their first church in 1800, as well as through educational and cultural institutions.  St. Patrick's Day has been celebrated in Douglastown for more than 150 years. 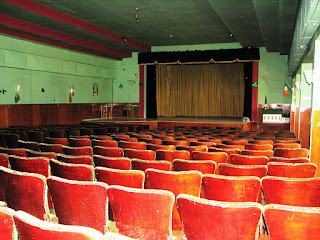 Today, many people from Douglastown are concerned about reviving and preserving their cultural roots as their community has been in a dramatic demographic decline since the 1960’s.  One strategy the community is employing to fight this decline is by attempting to restore Holy Name Hall.  The hall was built in 1937 but has been in neglect since 1990.  For many years, this parish hall was at the heart of the Irish cultural expression in Douglastown.  School concerts, St. Patrick's Day celebrations, and other major community events took place in the hall. Though no longer in use today, beginning in the 1940's, the hall also served as a local cinema, still equipped with two original 1945 Simplex high projectors using carbon arc lamps.  The building design was inspired by the fishery storage buildings and is contructed mostly from boards salvaged from burned buildings in Douglastown and donated lumber. It is composed of diagonally-laid weather boards to brace the balloon frame, covered with horizontal wooden boards on which were nailed asphalt paper imitating bricks. It features over 250 seats (dated 1897) made of wrought-iron, stuffed and covered with velour. The building was heated with wood. Some modifications were made in 1956 on the whim of the flamboyant parish priest, Father Patrick Nellis. Except a new heating system, the most important change was the covering of the facade with yellow bricks to create a cohesive look with the surrounding buildings (the presbytery, church  and school).

As of May 2010, Holy Name Hall has been granted heritage status by the Town of Gaspé.  This necessary step will allow the community to start looking for financing to assist in restoring this unique building for the population of Douglastown and the Gaspé coast.  The Irish descendants of Douglastown know that this project could play an important role in helping guarantee their future on the Gaspé coast.