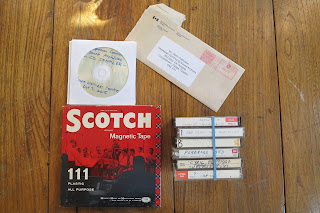 I put up a playlist of 27 songs and tunes from a sampler CD I prepared for the Gaspé Wellness Centre on the new sister blog, "Gaspesian Community Sound."

I created the other blog to share a greater diversity of local music in our archival recordings including country, rock n' roll, and guitar picking as well as, of course, fiddle music. However, I want to use this blog as a resource that is devoted more-or-less exclusively to Gaspesian fiddle music.

On the playlist you'll find some great fiddle music that we've recently acquired from old tapes, tunes played by people like Hermas Réhel, Bill Lucas, Willie Methot, Charlie Drody, James Henry Conley, Réjean Fergusson, and Gérard Durrette. Some of these players I would like to feature more right here in the near future.

Click here to go to the music
Posted by Glenn at 12:04 AM No comments:

Today I'm sharing some tunes that Brian and I recorded this past August in Douglastown in the house where his father Erskine grew up. Erskine's parents were Edgar and Beatrice (or Mrs. Edgar, nee Fortin) and built this house where they raised their ten children. The house was eventually passed to their son Watson Morris, Erskine's brother, who lived in it until his death. 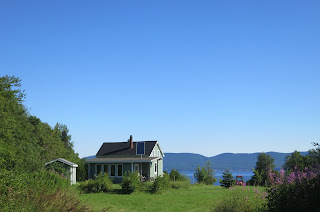 I'm currently living in the summer kitchen of the house, a portion which was separated from the main living space and moved further up the property where it now serves as a camp. It is a quiet and beautiful location far from the main road (the 132) and I enjoy amazing views of the Bay of Gaspé and the Forillon Coast every time I look out the window. I moved here last July to do fieldwork for my PhD dissertation (hence, why posts have been so slow). The current owner of the property has done a wonderful job preserving the best aspects of the work that Edgar and Watson Morris put into this place.

A lot of music was made in this space—both Erskine's fiddling and his mother's lilting as well as numerous house parties—and it was a special experience for Brian and I to make this recording where the music began so to speak. After a wonderfully hectic Irish Week, it was nice to escape and focus on the music, free from distraction for an afternoon in Mrs. Edgar's summer kitchen.

These recordings feature more diversity than many of the recordings we have made and include the guitar duets that Brian and I often do (I was a guitarist long before I picked up the fiddle, although I'm a little rusty these days) with a bit of bluegrass repertoire thrown in. The most inspiring moments for me were when Brian picked up the mandolin. He's never owned a mandolin but somehow, his father's tunes just came pouring out of his fingers on the first take, even at breakneck tempos. It's a real treat to get to hear this surprising and latent side of Brian's  musicianship, something both of us think is embedded in his intuition for music, having hearing so much of his father's playing growing up.

A special thanks to Brian Morris who EQ'd and mastered the recordings.

Here are the tunes:

Some notes on the tunes: 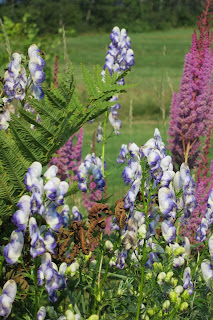 Awhile back a friend, Marc Bolduc, posted this historic NFB film le Pays du Québec (the Land of Quebec) on Facebook with some wonderful old footage of the Gaspé coast and the cod fishery. The footage is from all around the province but there is definitely a focus on the Gaspé. The filmaker, Laura Boulton, was a prolific American ethnologist and collector of music and instruments from around the world and has a centre named in her honour at Columbia University. She made several films for the NFB in the 1940s, it seems at least partly under the guidance of Canadian folklorists and anthropologists like Marius Barbeau and Helen Creighton.

At about 12 min 30 sec, you get to see the Famille Ouellet from the Kamouraska area tearing up a tune at a house veillée (kitchen party). I immediately recognized the tune as a melody that I had heard on one of Erskine's numerous home-made cassettes. According to Marc, the tune is called The Keel Row or The Kilrow, among many other titles. The tune is believed to have originated in the northeast of England (around Newcastle or Northumberland) and a keel is a type of river boat, apparently particular to the rivers Tyne and Wear.

Here is Erskine's own driving setting of this tune, complete with an additional third part with classic Gaspesian syncopation. He did not have a title for this tune as far as we know.

Enjoy
Posted by Glenn at 5:51 PM No comments:

Wishing everyone out there from Gaspé and beyond a very happy St. Patrick's Day. Here's a lovely rendition of "My Lovely Rose of Clare" that Norma McDonald and Debbie Sams recorded for the archives last spring. They did a consummate job and really bring out the beauty of the melody and lyrics. This is by far my personal favourite Irish song and their version can't be beat. Great job, you two!

Hear "My Lovely Rose of Clare"

We featured this song as sung by Norma's neighbour, Graham McDonald, on our recently-released CD, Douglastown: Music and Song from the Gaspé Coast.

And here is a lovely old photo shared on Facebook today by Elizabeth and Glenda Girard (originally of Douglastown) of their father, Joe Girard, dancing at the annual St. Patrick's Day concert in Douglastown, probably in the 50s or 60s. In their heyday, the St Patrick's concerts attracted capacity audiences of over 400 people from near and far, including Quebec's senior Catholic clergy. Joe Girard is known to have been one of Douglastown's finest step dancers. I'm not certain who the musicians are but, based on the electric guitar, I think it's MaryEllen Drody-Savidant providing the accompaniment. Elizabeth thinks that it might be either Gérard Durette or Joe Howell playing fiddle; her father frequently enjoyed dancing to Joe Howell's fiddling while Gérard Durette is an excellent French-style fiddler who was a mainstay at the St. Patrick's concerts. Let me know if you know who the musicians are. Thank you Glenda and Elizabeth for the photo.
Posted by Glenn at 1:36 AM 2 comments: