I recently completed a two-part article for the Gaspesian Heritage Web Magazine summarizing the work we have been doing over the last two years.  Gaspesian Heritage is under the umbrella of the Quebec Anglophone Heritage Network (QAHN) which works to preserve and document the history and traditions of the various anglophone communities throughout this province.  They do great work and you should check out their website.

I wanted to pass a special thanks to Matthew Farfan, the Executive Director of the QAHN, who edited my drafts and put the whole thing together on the website.  I've spent many hours reading articles and viewing photos on the Gaspesian Heritage Web Magazine and its a great honour to be able to contribute to their resources.  Also, thanks to Trena Devouge-Stirling, Debbie Sams, and Brian Morris for allowing me to use the music and photos from their collections.

Here is the article

Hope you enjoy.
Posted by Glenn at 3:52 PM No comments:

Gaspé Fiddle Technique: the "Hook" with the Veteran's Reel

Today I would like to take a look at a tune which demonstrates a fiddle technique I consider fundamental to the Gaspé sound and is something I have observed among fiddlers from Douglastown down to the Chaleur Bay.

The technique is what Cyril Devouge referred to as a "hook".  This is an unofficial term of course, but I really like the descriptive language Cyril used to use to describe different bow techniques ("jiggles" being another one we will look at sometime).  A "hook" is a very straightforward way to ornament a melody and simply involves playing what would conventionally be a quarter note (one beat) in a tune as two eighth notes (half beats) of the same pitch.  Basically, you double up on a note by bowing the same pitch twice instead of once.

Let's jump straight in and have a listen to how Erskine approached the Don Messer tune, "The Veteran's Reel".

Hear Erskine play "The Veteran's Reel" from the 1990 Cassette

Note how Erskine is doubling up on notes throughout this tune, but especially during the high strain.

Here is a transcription I have prepared to demonstrate this device, which I have notated by putting a little "+" symbol above each "hook" note.  Don't worry if you don't read music, just notice how many notes have little "+" symbols above them.

See my transcription of "The Veteran's Reel"

For the non-music reading audience, here is a link to an folder where I break down the tune and demonstrate this technique.

While this technique is very simple, it really drives a tune along giving it a hypnotic pulse.  This is an easy way to spice up your reels if you feel like changing up the rhythm a little. Although, Erskine and Cyril both used "hooks" in most of their tunes, Erskine's setting of "The Veteran's Reel" is the most extensive usage of this device I have encountered.

Some other thoughts about Erskine's setting of this tune:
This last observation might trouble some who might say that Erskine's structuring of this tune has strayed too far from the original Don Messer recording, from where Erskine likely learned the tune.  However, I feel that Erskine's surprising and perhaps ad-hoc restructuring of the tune's phrases in combination with his use of Gaspesian techniques  ("hooks", raised bass string, foot clogging, etc) transforms this tune from a standard reel with conventional rhythms and predictable structure into something mysterious and captivating.  Brian tells me that his father was never shy about adapting music into the Gaspé style, even if this meant reworking the melody and rhythm and occasionally the tune's structure.  In this case, Erskine keeps the tune's essence and shapes it into something new (or perhaps old) and beautiful.
Posted by Glenn at 5:30 PM No comments:

The Life of Mary Ellen Drody-Savidant

Although it has been quiet on the blog here the past month, I have been preparing lots of great new material during the holidays. I wanted to say thanks to everyone from Gaspé and beyond who helped us out during 2011, it was a really great year for this project and there should be some nice surprises around the corner.

Today's contribution comes from a friend of mine, Debbie Sams, of Gaspé.

Last October, Gaspesian music lost one of its most beloved friends, Mary Ellen Drody-Savidant, of Douglastown, Quebec. Mary Ellen was the daughter of Joseph Drody and Pearl Grant and was a sister of Brigid, Anthony, and Joseph Drody. Our guest contributor, Debbie Sams, was Mary Ellen's daughter.

This article has been in the works since November and Debbie has graciously sent me lots of material from Gaspé to use on the blog. She has written a lovely tribute to her mother which we will feature today. As well, we have some great audio clips of Mary Ellen's music and a beautiful slideshow Debbie created to celebrate her mother's life and music which are featured at the bottom. 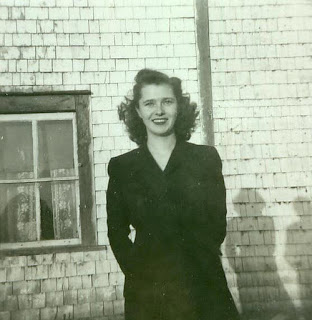 MaryEllen was born in Douglastown, one of ten children born to proud parents, Pearl Grant & Joseph Drody. When you think of MaryEllen, the first thing that will probably come to mind is her smile and upright stature and then of course her beautiful clear voice. 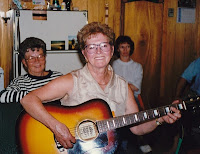 She had a gracious, calm way about her, and a caring, giving heart. She was probably happiest when she was giving of herself to others. In the early 1980’s, she received a prestigious award from the Canadian Red Cross for 30 years of service to ‘Community and Society’ for her work as a fundraiser and at blood clinics. She was probably one of the first to bring blankets and other goods on behalf of the Red Cross to people who had just been burned out in a fire.

In the year 2000, she received a plaque from CASA for her “Outstanding Volunteerism”. A note on the back said “Where there is a fundraiser, the beautiful music of Mary Savidant is there. How many times have we called on this woman to help us organize the music for a talent show? Mary does everything with a calm shy smile and her community wants her to know they are grateful.”

I guess her love for music was inborn because we hear of her youth in Douglastown where music took place in the kitchen around the old wood stove nearly every evening and the fiddle was passed around. She began singing publicly at about 12 years old for the St. Patrick’s Concerts in Douglastown at the Holy Name Hall and graced the stage for near sixty years. She is most remembered for her rendition of ‘Cottage by the Sea’.

MaryEllen married Calvin Savidant, son of Georgina White & Edward Savidant in August 1949 and together they had three children, Deborah, Susan and Perry who met with an early death at age 11, in 1969.

Yes music was her passion and she spread joy wherever she went. She gave of her time with a cheerful heart as she entertained seniors at Monseigneur Ross or at the Golden Age Club, or just visiting a shut-in and sharing a song or two with them. Her guitar was her constant companion.

Her generosity was also evident if you were fortunate enough to grace her dinner table. You would never be able to get away without having seconds. How many times she made a cake to bring someone who needed a little bit of cheering-up?

Yes she had a zest for life; fishing, hunting with the guys, and of course, entertaining! Those countless parties at the cottage that they built at Haldimand Beach that went on into the wee hours of the morning with fiddles, guitars, accordion…. MaryEllen lived a life rich in love of family and friends and her life was filled with music!

Throughout our correspondence, Debbie was generous to have mailed me a great collection of cassettes, CDs, and DVDs.  I would like to share some of Mary Ellen's music with the readers.

In the mid 1990s, CBC radio did an interview with Mary Ellen, Debbie, and Norma McDonald of Douglastown.  During the interview, Mary Ellen plays mandolin on a lovely tune she learned from her cousin, Ernest Drody.  Ernest played this tune for Laura Risk and I this summer and told us that he calls it, "Ernest's Tune" because no one else seems to play it.

During the same interview, Mary Ellen sang a song, "Beautiful Gaspé".  This song was written by a couple, Ralph and Ruth Craig, from Port Daniel, who wrote this song on a trip back from the coast to the Châteauguay Valley where they were then living.  They set the words to the melody of "Beautiful Dreamer" to express how much they missed their childhood home.

In 1994, after the passing of her husband, Calvin Savidant, Mary Ellen took great comfort in her music. The following year, she went down to Bathurst, New Brunswick to record an album of mostly Irish songs she learned growing up in Douglastown.  I would like to share the title track from Mary Ellen's album, "Cottage By the Sea".  Mary Ellen really seems to connect with the forlorn lyrics that express the sadness of losing a spouse.

Hear Mary Ellen sing "The Cottage By the Sea"

Debbie has also prepared a touching slideshow with music celebrating her mother's life.

Many thanks to Debbie for all the help she gave putting this article together and having donated so much great material to the blog.  I hope to post more material from Debbie's donations in the coming months. 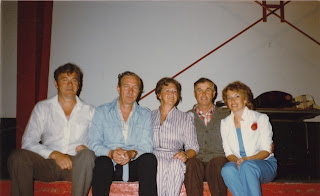 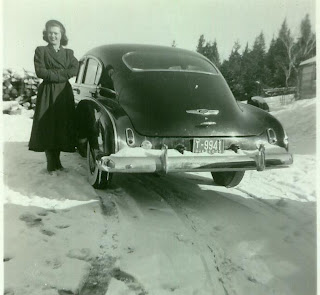